Harriët (she/her) pursues a PhD in philosophy around climate breakdown and privilege. With Stroomversnellers and Tractie she gives trainings around activism and media. She is co-host of anarcha-feminist podcast Bloed aan de Muur and writes for Hard//Hoofd. She has been a volunteer mediator in neighborhood conflicts for five years and is now part of activist mediation collective Weerstand. Naomi (the/she) got politised doing sexual rights work in their university, and has spent the last 5 years active in the European climate justice movement. They work in a collective called the Gastivists, focusing on gas expansion in the Eastern Mediterranean and also on the internal health of the collective. In their work in the Eastern Mediterranean, they have been learning how to build relationships and host spaces that accommodate sensitive geopolitical relationships; for instance with allies in Palestine, Lebanon, and Israel, and Northern Cyprus and Southern Cyprus. They are a big Adrienne Marie Brown fan. Rover (they/them) was radicalised through squatting and forest occupations, and is active in the transrights movement. They get excited about merging social work practise with acitivsm through mediation, training and group coaching. They are experienced as a neighbourhood mediatior, and co-found Weerstand Conflict Mediation collective. Trainer at Stroomversnellers. Their hope for social movements is that we do not only enact change in society, but also within ourselves and learn how to create healthy group culture. 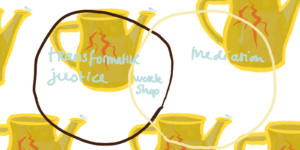